You are here:Home Marketing & Promotion How to Promote Your Book (When You’re Scared Out of Your Mind) 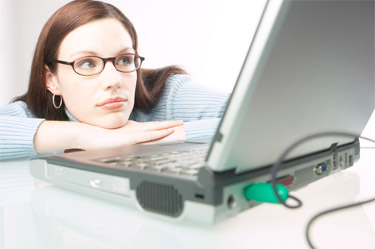 I was an advertising major, and our final project was to create an ginormous, cohesive campaign for Coca-Cola.

Being a total design geek, I used my skills to help our team create a project that blew away our competition. But, I never got much credit for all of that work.

Because, when it came time to present and defend the campaign to our professor, I opted instead to run the Powerpoint presentation (which I totally rocked, by the way).

Even though I was proud of my work, I couldn’t muster up the courage and confidence to promote it to others.

I regret that decision now. And I don’t want you to fall into the same trap.

You’ve done something many people only dream of — you’ve published a book!

After all of that hard work, your book deserves an audience. And I’m going to help you find one, even if you’re a totally introverted INFP like me!

To us shy types, self-promotion is sleazy. I get it. Hollering to whoever will listen to buy your book just makes us feel, well, kind of like used car salesman.

And, that’s the real rub, isn’t it? We just don’t see ourselves as the marketing type. Self-promotion is something that more outgoing, sales-y type people do, right?

Here’s the thing: you’re not a used car salesman, and neither am I. And that’s cool! It doesn’t mean that your book is doomed to wallow in the Amazon basement.

We don’t need to change who we are to promote our work. Instead, let’s change our definition of marketing itself.

But…how do we do that?

Used car salesman understand that you don’t like them or their tactics, but they don’t care. They’re only looking to make a one-time sale. If you never show up on their car lot again, that’s cool by them — they’ve made their commission!

You, on the other hand, don’t want just one-time readers. You want lifelong fans, right? Folks who will make it a point to download every new book, short story, novella and the like you release. Readers who love your work.

Want to know how to attract those readers?

2. Know exactly who will love your book and how to reach them.

Picture in your mind someone reading your book. Not just any old reader, though. Imagine someone who’s devouring every word, dreading the book’s impending end.

That’s exactly the type of reader we want you to attract. A fan who loves every word and will gladly share your work with her book-loving friends. Heck, fans like that will do part of your marketing for you!

But first, we have to get to know that rabid reader a little bit better:

Embellish this mental photo with as much detail as you can! This exercise is kind of like creating a profile for one of the characters in your book, only this character is going to lead you down a path to book marketing happiness.

Now that you know exacty who will love your work, it’s time to start a conversation.

(Notice that I didn’t say that it’s time to start selling books — what that used car salesman would want me to say. The sales will come, but, since we’re not salesmen, we want them to happen naturally, right?)

Every time you send a tweet, write an email, create a book description or publish a blog post, you’re having a conversation with your readers. Ask yourself: are you sending the right message? Would you be a fan of yourself?

When you’re doing this right, those conversations work to build a connection with your reader over time. What does this mean in practice?

Don’t make self-promotion this overwhelming, scary, monster of a thing. You’re sharing your work with people who will love it. Nothing wrong with that, right?

It’s kind of what Mr. Rogers taught us many moons ago: be yourself. The right people will love you just the way you are.

Before I wrap up, there’s one more piece I cannot neglect to mention: the importance of confidence.

For any of the strategies above to work, you must believe your work is worthy of an audience. What makes you rock? Is it because you’re the lovechild of Joshilyn Jackson and Carl Hiassen? Or because your book feels more like a movie?

Whatever makes you and your book awesome, write it down and own it.

Because, without that confidence, you’ll never promote your work effectively.

Just ask the college-senior version of  Toni. I think she’s still hiding behind that Powerpoint presentation. 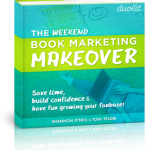 Want the exact steps to doing all of the above? Check out the FREE fully-edited and redesigned Weekend Book Marketing Makeover. In just two days you’ll bust through the marketing myths holding you back and set yourself back on the path toward success!