You are here:Home Publishing Self-Publishing: Our personal perspective

While trying to decide what publishing topic to blog about this week, it occurred to me that even though I have referred to my experiences in self-publishing several times, I’ve never actually given the background on what my experience was. Since it’s a huge brick in the foundation of Duolit, I thought I might take a minute to share my self-publishing journey and a little of what I learned along the way.

Flash back in time with me to the year 2008. It was August, I was a young, naïve 23 year-old, and I was crossing the stage at the Leon County Civic Center for the second time in as many years to receive my master’s degree from Florida State. I proudly carried my diploma out of the arena and deposited it unceremoniously on the floor of my old bedroom in my parents’ house where I was living in bitter unemployment. America’s historic presidential race was coming to a climax as politicians were debating the state of the economy while I searched for a job—any job—and came up empty handed.

Though I had some graphic design work set-up from Florida State to earn a little income, my life became a blur of daytime television, sleep and online job searching. A few weeks turned into a few months and my headspace deteriorated rapidly. Then one day in late September, I abandoned my leisurely afternoon window shopping session at Wal-Mart in a rush so that I could get home in time to see the four o’clock showing Golden Girls on Lifetime. In that moment, I realized I’d hit rock bottom.

While searching for reasons why this would happen to me (and to millions of other people as well) a light suddenly dropped from above and it hit me that I had been given the perfect circumstances for achieving my lifelong dream to write a novel. I had endless amounts of time on my hands, a restless imagination and a working laptop—what more did I need? 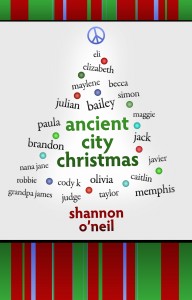 I started writing my first novel (which was then titled Ancient City Christmas) in early October with a goal of finishing it by my birthday, November 11th. Fueled by Mountain Dew, Fudge Stripe cookies and the Holiday channel on XM radio, I wrote from nine or ten at night until six or seven in the morning, at which point I would email my work to Toni (who was usually waking up as I was going to sleep). I missed my deadline by four days (most of which were spent recovering from a particularly nasty hangover I incurred on my birthday), but I felt like a champion nonetheless.

Then I thought—Oh crap! What do I do now?

I knew nothing about self-publishing. Toni, I think, was the one who first mentioned Lulu to me because her sister-in-law had worked there at some point in time and Toni had used them to make a compilation book of X-Files episode summaries as a gift for someone (yes, she’s a nerd!). I looked up their website and thought it seemed like a good deal—until I started trying to sort my way through the details. Distribution? Copyrights? ISBNs? What did all of this stuff mean? And more importantly, what did it cost?

With few other options, I Googled until I’d almost worn the letters off my keyboard. I learned that distribution was the only way to get my book on the major sites—like Amazon and Barnes and Noble—and that I would maintain the copyrights to my work even if I used an ISBN (International Standard Book Number) registered to Lulu. But as I took the time to sort the details out, the days melted away into Thanksgiving. Since my book took place at Christmas time, it was imperative that I get it out as soon as possible. Time and money were ultimately my deciding factors, so I chose to just put the book on Lulu.com without an ISBN and sell it strictly on their website (which was free to set up).

The day I received my proof copy in the mail from Lulu was easily one of the best days of my life. I danced around the house in my pajamas, clutching the very first copy of my very first book. You don’t know what accomplishment feels like until you’ve gone without it for a very long time.

I’m not going to lie to you—most of the things we preach about here at Duolit (i.e. marketing, branding, websites, design, etc.)—were light years away from my mind at that moment. My goal was to write a book and I achieved that goal. Anything else was icing on the cake at that point.

But in a year’s time, all of that would change.

By August of 2009, my situation had turned around dramatically. I had just gotten a job and moved out of my parents’ house into my own apartment. Still, my book was in my thoughts every day. I took time to go over it again and make some changes. I added a few chapters and decided along the way to give it a new name that was less regionally specific—I’ll Be Home for Peacemas. 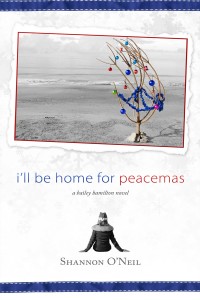 When it came time to publish again, I had planned to return to Lulu. My experience with them had been mostly positive. One of the first copies of the book I received was inconsistently printed (the text was really light on some pages almost to the point of being illegible). I notified Lulu and they immediately sent me a replacement copy, no questions asked. The only negative thing I could say about them based on my initial experience was that their shipping prices were ridiculous. I was embarrassed that my family and friends who wanted the book had to pay almost as much in shipping as they did for the book itself. Still, with a distribution plan the shipping wouldn’t be a problem, so I figured I would return to Lulu for the second (but first official) edition of my book.

But in the year that had passed since our last encounter, Lulu had drastically changed its business model. Most notably, the 24/7 chat feature on the website was gone. In fact, just finding a phone number on their website was nearly impossible. I grew frustrated and a little worried. When you pour so much of yourself into a piece of work, you don’t want to put it in the wrong hands.

So I did a little more Googling to find some other options. There were a lot of viable self-publishing companies out there, but most of them only offered packages that included design services (which I didn’t need, since I was fortunate enough to have a talented friend like Toni!). I didn’t want to pay for services I didn’t need, so I started searching for printers instead of self-publishers.

That’s how I found Lightning Source.

Several articles I read indicated that many of the self-publishing sites like Lulu, CreateSpace, etc. actually outsourced their printing to Lightning Source. They were willing to work directly with authors, provided that all of their files were ready to go (they do not provide any kind of design or editing services, it’s strictly printing). Best of all, Lightning Source is affiliated with Baker & Taylor and Ingram, the two largest book distributors in the world. For $12 a year ($12 a year!!!) you can be on the distribution lists for both, which gets you on all the major booksellers’ websites and makes your book eligible for orders from brick and mortar stores and libraries.

Satisfied that I’d found the answer to my prayers, I purchased my ISBN and barcode from Bowker, formatted my PDF files and signed up for my Lightning Source account. I was assigned an account representative who provided me with her phone number and e-mail address (imagine that!). She even called me when the first proof of my book was printed to let me know that the bleeds weren’t right and I needed to adjust my files accordingly, which saved me $30!

They told me it could take up to 6 weeks for my book to show up on the Amazon, Barnes and Noble, and Books-A-Million, but it actually happened within a week. I had put together a marketing plan before re-publishing the book and it started with a website (created of course by my good friend Toni). Since my book takes place in my hometown of St. Augustine, Fla., I decided to make a local push and scheduled a few signing events at local book stores and the library, as well as my old high school. I balanced those local promotions with some widespread pushes on Facebook, Twitter and my blog. The overall feedback was great and I sold a few hundred copies in two months.

One journey leads to another.

My journey wasn’t perfect by any means, but I learned a tremendous amount of information about the self-publishing industry just by jumping into it headfirst. Unfortunately, not everyone has time to delve into things and sort out all the details (I only had the time to do it because I was bitterly unemployed and living at home with Mom and Dad).

That’s why Toni and I decided to start Duolit–between her design and marketing skills, my marketing and PR skills, and the combined knowledge we accrued through my self-publishing experience, we felt like we could help other authors wade through the process.

We don’t want to take the “self” out of self-publishing, we just want you to know it doesn’t have to be a solo trek from start to finish.