You are here:Home Marketing & Promotion What Will Smith Can Teach Us About Selling Books

What Will Smith Can Teach Us About Selling Books 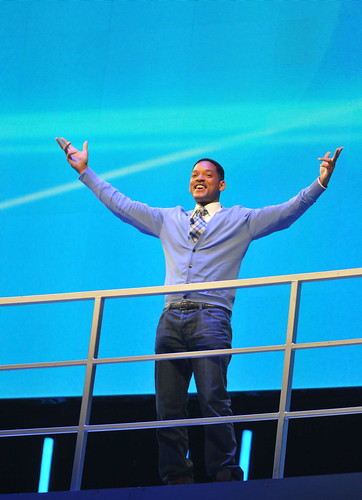 He’s king of the world (or at least the box office). Photo by walmartcorporate.

In the last ten years, Will Smith has made 10 movies. Of those 10, nine of them hauled in a minimum of $100 million in box office sales apiece.

(Seven Pounds missed the mark by a measly $40 million.)

If you think that his success is by accident, you’re wrong. It’s by educated, researched design.

Many years ago, when Will Smith was preparing to enter the movie industry, he and his manager decided that they didn’t necessarily want to make Oscar winning movies or spirited indie flicks, they wanted to make box office hits. Period.

So they did their research, studied the 10 top grossing movies of all time, and identified the common characteristics.

This is what Will himself said about that research in a 2007 Time Magazine article:

So what did he do?

And you know what? They were all box office hits.

He threw in the occasional drama (Pursuit of Happyness, Seven Pounds), kids movie (Shark Tale) and sports flick (Ali) to mix things up and suddenly, Will Smith had a booming movie star career.

So what can we learn from Will Smith’s strategy?

Well, if you’ve decided you want to earn a substantial, sustainable income from commercial writing you can use the same three steps Smith used to get there.

There’s nothing wrong with approaching your career from a different perspective. If, for example, you want to produce award-winning literary pieces that’s a great career goal as well.

I’m not at all saying you MUST do it this way.

This method is just for authors who have a goal of a financially beneficial career in writing (and nothing’s wrong with that either). To successfully execute this strategy you will have to put marketing and sales before your creativity, many authors are not okay with that. You need to know yourself and what you want out of your writing career before you decide to pursue this avenue.

Also keep in mind that once you’ve jumped the hurdle, made some great sales and established a crazy-dedicated fan base, there will be time later in your career to explore your creative side and take more risks (that aren’t necessarily based on marketing research). Check out John Grisham’s career path as an example.

How you can use the Will Smith Strategy

To use the Will Smith approach in your writing career, you need to follow these three easy steps:

1. Research the best-selling books in your genre and find the common denominators.

Pick your genre of choice (YA, science fiction, paranormal, romance, chicklit, etc.) and find out what the top ten best selling books are in that genre.

This is a little harder than it might seem on the surface.

I couldn’t find an all-time best seller list by genre, but this handy tool from USA Today at least lets you sort by genre and pick the week of your choice from anytime over the last several years. Amazon also offers the ability to sort genre lists by popularity.

Once you’ve got your list, you need to figure out what elements these best sellers have in common.

If you’re looking at the science fiction genre for example, do most of the books take place in space? Are they in alternate galaxies or other planets within the Milky Way? Is there a love story? Murder mystery? Aliens?

If more than half of the books you research contain the same element, add it to your list. You should be able to compile a half dozen or so different traits that they all have in common.

From those traits you can begin to form your plot and characters.

By my estimation there are approximately 234,985,047 vampire novels in circulation right now and another 349,062,175 dystopian books to boot (those numbers are rough estimates and probably grossly understate the issue).

The point is, if you’re going to do this right, you have to make yours stand out from the crowd.

This is where your creativity does come into play. You have to step outside the box and find some new elements to mix in with what your sales research has taught you.

Whether it’s a different perspective on an old issue, a new world that has yet to be explored, or the benefit of a completely different and unique writing style, there has to be something different that will make people want to read your book when they’ve already read different ones.

Going back to our Will Smith example, what made all the Men in Black movies ($250 million, $190 million, $178 million respectively) and Independence Day ($306 million) more popular than Battleship ($65 million)?

They all had aliens and special effects, right?

So there was something about the plot or characters that made Will Smith’s movies more popular than the Battleship bomb. (For what it’s worth, I think that comedy had something to do with it — the trailers for all four Smith movies contained snappy one liners while Battleship comes off looking like a Michael Bay rip-off that takes itself too seriously.)

Here’s where the difference between winners and losers is really made.

You can have a great book with great subject matter similar to that of all best sellers, but if nobody knows about it, it doesn’t matter. No Will Smith movie ever hit theaters without you knowing about it at least a month or two in advance, right?

Fortunately, marketing a ready made best-seller based on the popular books in your genre is pretty straightforward. There should be plenty of available arenas where books of that type are heralded, you just need to jump in the game and introduce yourself.

You know I hate to use this example, but that’s how 50 Shades came to be what it is now. It was shared in the Twi-hard fan fiction forums and it spread like an STD (see what I did there?).

So all you need to do is find the forums, blogs and other popular hangouts for fans of the popular books you researched and jump in the game.

Participate in the conversation, make friends and share the details of your book (in that order, please).

What do you think? Would you try it?

So that brings us to the $100 million question — would you try Will Smith’s approach with your writing career?

Certainly $100 million is very near impossible for book sales (unless you’ve got the next Harry Potter series up your sleeve), but with some research in your pocket and great marketing you could surely aim for a very financially successful career.

I’d love to hear some answers from you guys on these questions as well:

Give us your thoughts in the comments!