You are here:Home Blog Prompts “Across the threshold” [February 2012 Prompt #2]

This week we’re getting more creative with our weekly writing prompt.

We want you to take a few moments out of your day to get those creative juices flowing by writing a short story, poem or any other art form you’d like that contains the line, “…she stepped across the threshold and took the first delicious breath of her new life…” 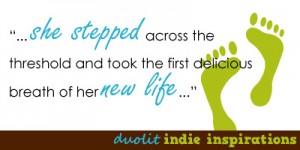 Add your creative writing piece to your blog and link it up in the comments below. We want to see what great work you guys can come up with! To help get the sharing started, I’ve written a little short story of my own featuring this week’s prompt. Check it out and don’t forget to email us your suggestions for next month’s prompts!

Every weekday at noon, June Adler drove to the edge of the bay, put her car in park and ate her lunch. She brought the same meal every day—a peanut butter sandwich (no jelly, thank you) cut into four even squares and carefully stored inside a plastic Tupperware container. If she was feeling indulgent, she would buy a coke from the vending machine at work before embarking on her journey, though most days she was content to sip from a bottle of water.

Until the day she saw the yellow boat.

It was a Tuesday, a little overcast and cool. The normally placid bay beyond her windshield was punctuated by the bright yellow hull of a tiny sailboat. June had previously assumed that all sailboats were grand and massive with big, billowing sails—the kind that could carry conquistadors across oceans. But the yellow sailboat was like a child’s toy; bright, compact and fun.

When June came back on Wednesday and spotted the boat still anchored in the bay, she felt an odd sensation. So rare was the feeling of intrigue and anticipation that at first June didn’t even recognize it for what it was—excitement. She conducted an intense visual study of the boat, sweeping her eyes from bow to stern and taking in all the details the little boat had to offer.

June had never been on a sailboat before. In fact, she’d never been on a boat at all. Her mind rushed through a series of increasingly intoxicating thoughts of what it might be like to set foot on that boat. She was so taken by her daydream that she was late returning to work from lunch, turning back into the parking lot with half a peanut butter sandwich still tucked inside the Tupperware in her passenger seat. 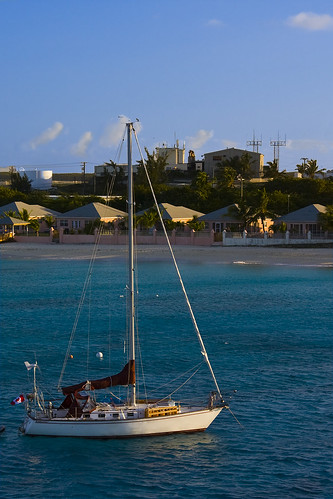 All afternoon she thought about that boat. She dreamed about it that night. By the time the sun rose on Thursday morning June was certain that she would never be able to think about anything but that boat ever again. She dressed for work in a hurry, forgetting her earrings and watch. She bumbled through her work all morning, watching the clock from the corner of her eye waiting for the two hands to meet.

When her time finally came, June drove straight to the little park on the bay and parked her car with the nose facing out at the little yellow boat. She had not seen any movement on the deck for three days, nor even the slightest shift in the boat’s position. June was convinced that the boat was abandoned. Left, in fact, for her to discover it, climb aboard and sail away.

June left the keys in the ignition, the peanut butter sandwich in the seat, the coke in her drink holder, and climbed out of the car. Gravel crunched beneath her feet as she approached the edge of the water. In the sand and reeds along the shore she kicked off her heels and waded in up to her knees. And then up to her waist. And then up to her neck.

It was early spring and the water was colder than June had imagined. She lost her breath for a moment, but found it along with her swimming stride. She bent her elbows and rotated her shoulders to make each long stroke through the water. As the cool liquid nipped at the hair tied up in her tight bun, June paused to release her dark mane from its clip, allowing it fan out in the water behind her like a bridal train.

At last she arrived at the little yellow boat. She wrapped her fingers around the bottom rung of the ladder and pulled herself out of the water. The bright sun beat down upon her skin and her wet clothes as she climbed up and over the railing. Her bare feet landed on the warm deck and she felt deliciously delirious.

Exhausted from what had been a longer swim than she’d expected, she dropped to her knees and took in the view before her. Her city stretched out like a glittering crescent along the shore. Across the water she heard the faint echoes of car horns and sirens. She was once a part of that world, but no more.

When she finally caught her breath, she stood to explore the little yellow boat she had conquered. June padded along the deck back to the stern where she ran her hands over the wooden helm. Straight ahead she could see the wide open ocean just waiting for her. She was ready. Pull up the anchor, hoist the sails, and she would be gone.

June stepped around the helm and descended the short staircase into the cabin below. She had just started to pick through the cabinets in the galley when she heard the lapping of waves against the hull growing louder and larger in size. It was accompanied by the low moan of a small motor.

The man’s voice startled June from her daydream. She looked up at the open door to the cabin, her heart racing. The old June would have fallen apart in that moment. She would have cowered in the corner, sobbing and begging forgiveness from whomever was approaching.

But that was not the same June who now stood at the center of this tiny cabin, her blouse ripped, her pantyhose ruined, her hair a wet mess. Chin up and shoulders back, June marched purposefully up the steps one at a time. She would capture her dream at any cost. It was too close, the taste too tantalizing to give up now.

At the top of the stairs, she stepped across the threshold and took the first delicious breath of her new life.