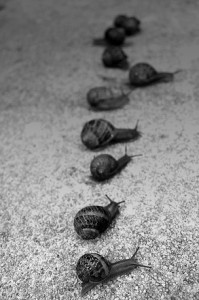 Did dinosaurs and gazelles even exist at the same time? [Note: Turns out they did . Thanks Wikipedia.]

The Tortoise and The Hare…Sort Of

Picture a dinosaur and a gazelle, all decked out in their matching tracksuits for a footrace. Which would reach the finish line first? The hulking dinosaur (in his snazzy Juicy Couture pink-and-black getup) or the swift gazelle (in a modest Nike windbreaker and pants)? Would be able to better adapt to sudden obstacles, whether it’s a bump in the road or a meteor raining down from the sky? Which is still around today? Yup, you got it, the gazelle.

Well, it turns out dinosaurs are a lot like the publishing industry. Big, bulky, slow to change and maneuver. Luckily, you, as an author, are a gazelle. You have the power to choose your publishing direction, to dictate the look and feel of your book, which markets you reach out to, and how exactly you touch them. This is the power (and burden) of self-publishing. END_OF_DOCUMENT_TOKEN_TO_BE_REPLACED

Self Publishing: My Personal Perspective 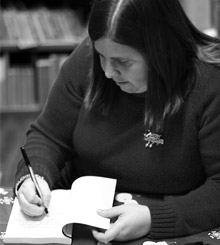 When I started writing my novel in 2008, I knew only that I wanted to turn my childhood dream into a reality.

Let’s get the bad stuff out of the way (it’s like a band-aid and we’re just going to rip it off!)

Fact: The publishing world is not easy to break into. Unfortunately, anyone can slap some words on paper, call it a book and start peppering agents with query letters. After reading enough of those letters each day, agents get jaded and overworked, which is why they reject about 98% of what they receive (that’s a higher rejection rate than most reality dating shows). Worse yet, even if an agent does manage to notice the glow of your talent amongst a pile of poo, there’s no guarantee that he or she will be able to sell it to a publisher. Even if he/she does, odds are it’s going to be to the subsidiary of a subsidiary of a subsidiary of a subsidiary of a major publishing company or an independent publisher equally as small. They might give you a piddly advance and order a few thousand copies of your book, but don’t expect them to spend money on a marketing campaign or a book tour, let alone give Oprah a buzz and ask her to add you to her book club.

It’s not because they don’t like you or even necessarily because they don’t think your book is good. It’s just that selling books is a tough business when you’re competing against T.V., video games, the Internet, movies and all other forms of entertainment. Not to mention stiff competition within the industry itself. The traditional publishing industry pumps out more than 500,000 books a year, but less than 20,000 actually make it to brick-and-mortar stores. On average, each of those 500,000+ books only sells about 500 copies. So while we all may dream of Twilight-esque success, it’s still a bit of a crap shoot (by the way, Stephanie Meyer sent out 15 query letters to agents for Twilight, five of which went unanswered, nine were rejections and only one was a “yes”).

Thanks for depressing me, now I get why Van Gogh cut his ear off.

Don’t despair, there is another way! After thoroughly investigating the publishing world, I didn’t decide to give up on the traditional route, but I did decide to pursue other avenues while waiting for my proverbial ship to come in. That led me to the magical world of self-publishing. (Okay, maybe magical isn’t the right word, but it is pretty incredible.) With the growth of technology, the self-publishing industry has actually overtaken traditional publishing methods in number of books produced each year.  Self-publishing isn’t necessarily an easy route to success, but it is a very attainable way to share your book with others and generate a following that can help you get further in the traditional publishing industry. Here are some of the pros and cons:

What all is involved? Do I have to sell one of my children to finance this? 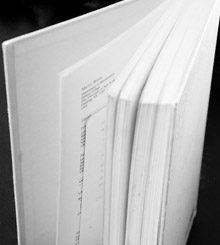 Let me give you the basics. Your first step, of course, is to write the book. After that, you need to choose someone to print and distribute it. You can use one of the all-inclusive sites like Lulu or CreateSpace, but be warned that personal contact is limited in those places. I used Lulu for my first book, but when I went to publish my second, I chose not to go back to them because they dropped their 24/7 online chat option. That made it much more difficult for someone with a full-time job like myself to get in touch with anyone there when I had questions.

After I decided to part ways with Lulu, another author recommended going with a printing company called Lightning Source. My experience with them was wonderful, however, they are only responsible for printing your book, putting it on a distribution list (which gets you on Amazon.com and other book selling websites) and shipping it when an order is placed. They will not design your cover or do your interior layout, you’ll have to find your own designer for that (hint: Duolit designs book covers and interior layout).

You’ll also have to purchase an International Standard Book Number (ISBN) and barcode for the book and submit that to your designer. Once the book is ready for print, it goes into the printer’s database so that copies can be printed and shipped each time an order is placed. That’s called print-on-demand (POD) and it’s what makes self-publishing affordable. Instead of having to buy several thousand copies of your book that will sit around your house like a starter kit for getting on TLC’s show “Hoarders” your printer just keeps your files on their computers and prints a book only when someone wants one. No inventory, no restocking fees, no headaches.

Why do I feel like there’s way more to it than that?

Okay, really that’s just the tip of the iceberg on self-publishing. You probably still have some questions about how the self-publishing process works, how much time and money you’ll have to invest in it, and what kind of sales you can expect. That’s what we’re here for. You can talk to me one-on-one about my experience through e-mail or instant message or check out our blog and FAQ for a little more detail. Aside from the printing, Duolit can help you with every step of the self-publishing process.

And don’t forget after you’ve published the book, you have to market it! Check out our Marketing category for more information on that.